home » Vol 2 Num 4 (2019) » Reseñas críticas » Osho in America: between the counterculture and the conservative reaction

Osho in America: between the counterculture and the conservative reaction

Compartir
* Nicolas Viotti He is a researcher at CONICET and a professor at the Institute of Higher Social Studies (IDEAS) of the National University of San Martín (UNSAM) and of FLACSO-Argentina. He has a doctorate in Social Anthropology from the PPGAS-National Museum of the Federal University of Rio de Janeiro (UFRJ) and a sociologist from the University of Buenos Aires (UBA). His area of work has to do with the relationships between modes of knowledge, the boundaries between religiosity and spirituality, the practical construction of well-being and its impact on social hierarchy and contemporary modes of subjectivation. 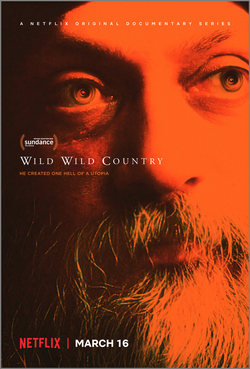 Premixed at the Sundance festival and celebrated as one of Netflix's phenomena, Wild Wild Country catches your eye within minutes of starting to see it. In six one-hour episodes, each one traces the experience of the spiritual movement led by Bhagwan Shree Rajneesh (later known as Osho) in the United States. The plot recounts in detail how the followers of one of the most famous and influential Indian gurus of the last decades bond with the inhabitants of Antelope, a town of fifty people in the northwestern United States. There Rajneesh built a spiritual city, Rajneeshpuram, for fifty thousand followers, at the beginning of the 1980s, which brought with it tensions with the inhabitants and bulging problems with the state of Oregon and the government of the United States.

Whoever believes that the documentary is only about that anecdotal episode is wrong; actually Wild Wild Country It is an intelligent analysis of the religious and cultural change of recent decades in Western societies and, above all, a reflection on profound American society, the one that has come to light in the post-Trump context. In addition, in a way it is an example of socio-anthropological reflection on an alterity that turns out to be a little more complex than what we usually imagine.

The first episodes of the series describe the moving of the ashram from Poona (India) to Antelope (Oregon) from biographical experiences and television archive material. This material composes a body of stories and images that narrate life in the ashram from Poona and especially the arrival of Rajneesh to Antelope. However, the move to the United States opens up a new narrative space: telling and accounting for the inhabitants of the small town that receives them. For the sannyasins it is the arrival in the promised land, the opportunity to build a city to live in freedom. The United States is for them the space of religious freedom and the place par excellence of pluralism. However, for Antelope's neighbors, conservative Protestants who see themselves as heirs to the ideology of American pioneerism, the perspective is quite different: Rajneesh and his sannyasins They came to threaten the values, to keep the lands, to ruin the tranquility.

For that reason Wild Wild Country It is not just a documentary series about Osho, but about a relationship: that of Osho and the United States. Who are the "savages"? Osho and his followers or the deep United States? On the one hand, that they are all "wild" in their own way would seem to be one of the lessons of the film. On the other, the United States is the paradox of an image of pluralism, freedom and democracy that is relative when its core values are threatened. If that tension remains latent in all the episodes, the documentary has the virtue of breaking with the dualism that opposes "good" and "bad", entering with the cameras in the intimacy of all its protagonists and making the strange something familiar and of the strange familiar. He takes a close look at their private objects and the decoration of their houses, their way of dressing, their gestures and their laughing and crying faces, but also portrays their miseries, their fears and their desires, producing a strange empathy with all those interviewed.

The central episodes show the escalation of conflict and violence. Since Rajneeshpuram they deploy “legal” maneuvers to seize political control of the region, ranging from buying up all the town's property to bringing in beggars from all over the United States to vote in favor in regional elections. Also illegal ruses that include applying sedatives to beggars when they do not adapt to the peaceful and balanced way of life proposed by Osho, a plan to assassinate a representative of the county and an alleged bioterrorist salmonella attack that affected ten restaurants and almost eight hundred people. of the state of Oregon. For their part, the residents of Antelope and the conservative associations of citizens of the state did not stop. Armed gangs, intimidation and a nationwide anti-sect campaign are just some of the resources they deployed in the dispute against Rajneesh and his followers.

Public controversy and open conflict is the lynchpin of the narrative. The final episodes focus on legal issues and the persecution of Rajneesh and his assistants for causes of bioterrorism and immigration fraud. In 1985 they were all expelled from the United States and Rajneesh died like Osho in 1990 in India. Most interesting, however, are some key biographies of the sannyasins closer to the decision-making leadership of the organization. Among them, Ma Anand Sheela stands out, the most captivating and protagonist of the most intimate story. Sheela was Rajneesh's personal secretary and assistant, who ends up in a fierce dispute with her teacher and emigrates to Germany and then to Switzerland, where she currently runs retirement homes after serving a prison sentence in the United States. In a way, if the central tension is between the sannyasins and the Conservatives of Antelope, the subsidiary tension is between Sheela and Rajneesh, a story of love, devotion and betrayal.

From the biographical accounts suggestive data about conversion processes to spirituality of the New Age type, the work with the emotions and the vital transformation of the movement emerge. What is the impact of Osho and his spiritual project in the global arena? This is actually an aspect little analyzed in the documentary, but one that is important to keep in mind, since the emphasis is placed exclusively on his relationship with the United States and not on the global cultural movement associated with his preaching and his highly successful capacity to speak. transformation within the contemporary spiritual horizon. The influence of their ideas and practices present challenges for the sociology and anthropology of religion and are a fundamental issue in the processes of cultural change in Western societies, especially in their middle sectors, linked to the ideas of charisma, authority and the new “spiritual” sensibility (Lindholm, 2002), but it is also a central aspect of the ways in which this relative sociocultural novelty is subject to public regulation (Van Driel and Van Belzen, 1990). His books are among the best-selling and most widely read in the world, his ideas are cited both in New Age circles and by renowned Western philosophers. The German philosopher and heir to the critical tradition of the Frankfurt school Peter Sloterdijk, for example, lived in the ashram de Poona and has stated that Osho made a fundamental contribution to philosophy and the dialogue between Western and Eastern thought (Sloterdijk, 2019).

Wild Wild Country it is the multifaceted composition of a situation of encounter or "contact", as anthropology teaches us. But in this case it is not the encounter between Western society and an "other", but the arrival of an "other" at the center of Western culture. Like all contacts that history and anthropology have studied, the peace dialogue is an illusion that leaves room for conflict.

Describing this unique case from a plurality of views and voices, which are explicitly lived as emancipatory and conservative, the documentary builds a story about our contemporary world, where the tension between old and new conservatism coexists with the emancipatory project after the 1960s. They are there locked in that Antelope drama during the first years of the 1980s, both the environmentalisms, feminisms and spiritualisms that educated us in the last forty years as the conservative arc that goes from the reaction wasp from the 1960s against new alternative lifestyles, to George Bush Sr.'s statement in 1992 at the Rio de Janeiro world summit on climate change: "Our way of life is non-negotiable!"

We could suggest that what Wild Wild Country It puts at stake is a very current issue, the dispute between ways of life inherited from the counterculture and a conservative way of life that, as G. Bush pointed out, is not negotiable. The series was released in a context where the government of Donald Trump and the global elites seem to reorganize a new order that abandons some of those values that both liberalism and the cultural left believed to consolidate in recent decades.

Perhaps that is why it is such an attractive documentary series, not only because the Osho case is interesting and curious, but because it touches the nerves of our contemporary life. And he does it in a way that does not take sides with one of those projects, but rather tries to understand each one in all its situated complexity. As we have already pointed out, throughout the episodes we identify with Rajneesh's project and his countercultural preaching of freedom and unfolding of consciousness, emotional and sexual experimentation. But in a short time we also believe we understand Antelope's neighbors, who feel threatened by the arrival of thousands and thousands of people from all over the world with different customs and habits, with little intention of respecting their neighborhood life and their conservative morals.

In addition to being an analysis that accounts for recent sociocultural and political processes, relevant to our situation, it is an example of a complex and non-binary look. Wild Wild Country It is thus a documentary that could well be thought in tune with the academic production of a current of sociology and anthropology that prioritizes complexity and the diverse points of view at stake as a particularly valid approach. This diversity of points of view, without assuming one as the only one or the one with the highest hierarchy, does not imply the renunciation of a critical diagnosis of the situation, but rather a more complex and realistic reading. In this sense, the documentary is an epistemological lesson on how to construct a socio-anthropological problem, accounting for the complexity of the interested visions, but maintaining an analytical view that is interwoven with that complexity.

In addition to being an engaging and rhythmic documentary about Rajneesh's experience in America, Wild Wild Country is an experimental exercise on how audiovisual language can bring classic social science problems to the general public. There are the themes of conversion, rumors, moral panic and, above all, that of contemporary spirituality and religious pluralism. But also that of cultural change and the tensions that it raises with the conservative morals that we have to live.